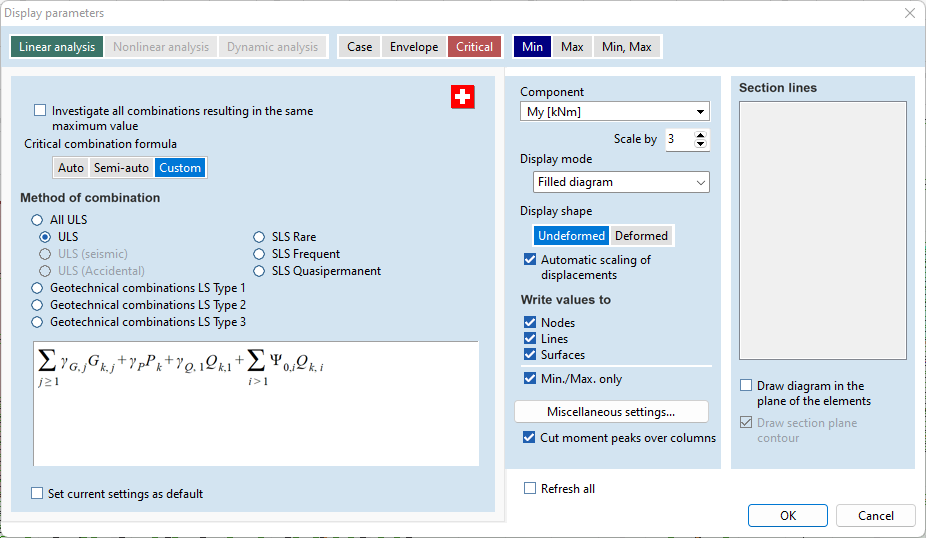 Whether we are talking about “ULS” or “All ULS” critical combinations, what always happens in the background is that the scaler takes the extreme values of the normal force and the concomitant bending from the selected critical combination, and similarly the maximum bending and concomitant normal forces. Finally, the design is performed on these internal force pairs and these points are displayed.

The reason that “ULS” combination method may show more points than “All ULS” is that the program looks for values within a certain tolerance for the maxima. So if you get close to the maximum loading in several load situations in the “ULS” combinations, the program will pick up more point pairs there. The same can happen for “All ULS”. It cannot be stated that in “All ULS” we should see at least the same or more points than in the normal “ULS”.

The fact that in the given example, the N-Mz diagram appears to show points in the case of “ULS” combination method that has a larger Mz value in this view (N-Mz) than in the case of “All ULS” does not in itself mean that these are the relevant points in “All ULS” as well. Indeed, if the same points are examined from a different angle, e.g. in a My-Mz diagram (figures below), it can be seen that in “ULS” combination method, points with slightly larger Mz values are associated with smaller simultaneous My values. And in “All ULS”, slightly smaller Mz values are associated with larger simultaneous My values. All of this suggests that, since the program calculates utilization for simultaneous demand pairs, it is not possible to determine, by looking at the N-Mz intersection alone, whether or not the points would be critical in all combinations.

Still stuck? How can we help?

How can we help?

You can find out more about which cookies we are using or switch them off in settings.